City Angels is an initiative to promote a closer working partnership between Brighton & Hove Pride with local retailers, restaurants, hotels and other businesses.

The year-round campaign will see Pride promoting the Brighton retail and hospitality economy, whilst asking those businesses that benefit from the £20m+ that is spent over Pride weekend to engage their civic pride and get involved through the Pride City Angels programme.

Some of the Benefits members receive include:

Starting at just £100, annual memberships costs are dependent on the sector and size of your business.

100% of the profits from City Angels memberships is reinvested in to city and community. Whether it is through reducing waste in events supply chains, silent disco beach cleans, sponsoring bins, or consumer-focused campaigns to reduce littering – there is plenty for us all to do – and focusing our effort means we can bring greater benefit. 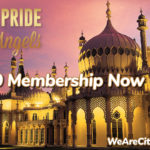